“What happens to a man when he dies?” . . . “Does a man really have a spirit?” . . . “Where does a man go when he dies?” Questions such as these have been a matter of great interest throughout history, but no one has been able to answer them. Men eager to find such answers wrote great philosophies, but mere philosophers could never realize how they had been created.

Christ Ahnsahnghong came to the earth, established the Church of God, and taught us that all men are angels who have come to the earth after sinning in heaven. He let us know how valuable we are and revealed to us the true purpose of our lives.

The Spirit Revealed Through the Creation of Human Beings

Gen. 2:7 『. . . The LORD God formed the man from the dust of the ground and breathed into his nostrils the breath of life, and the man became a living being.』

The dust is not the essence of life; God didn’t name the dust itself a “living being.” Only after God had breathed the breath of life into the dust, did He call it a “living being.” Therefore, the essence of life is not the flesh, but the breath of life, the spirit that God breathed into the dust. Man’s flesh is made from the dust, but his spirit is made by God, and is from God.

Solomon wrote, “The dust returns to the ground it came from, and the spirit returns to God who gave it” (Eccl. 12:7).

Jesus Taught Us About the “Spirit”

The concept of “spirit” became clearer in the New Testament.

The Greek word for soul in this verse is “pneuma,” which means “spirit.”

The Apostle Paul, in a letter to the Church in Corinth, wrote as follows:

Jesus taught us that the true essence of our life is not our flesh, but our spirit.

The Apostle Paul’s Thoughts About the “Spirit” 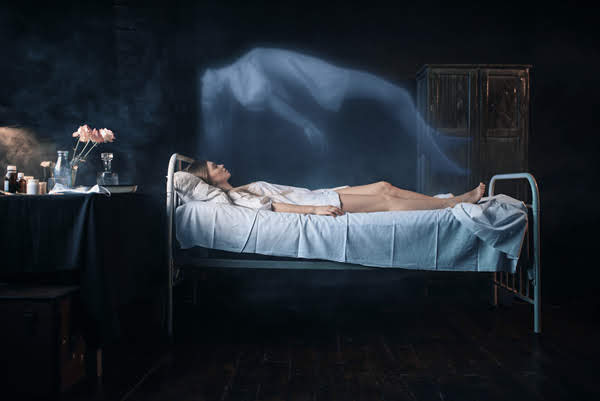 We try to understand the apostles’ minds because their thoughts were established by Jesus’ teachings. The apostles understood that our flesh is merely the house of our spirit.

2 Cor. 5:1 『Now we know that if the earthly tent we live in is destroyed [if our flesh dies], we have a building from God, an eternal house in heaven, not built by human hands.』

Our spirit lives in a temporary earthly tent—our flesh—now, but it will live in an eternal house that God has built for us.

In the above verses, what is the entity that dwells in the body and then leaves the body? Paul’s spirit, the very essence of Paul, is the one who wants to leave the body. The body he wore was not the essence of his life, but instead, Paul’s spirit dwelling within his body was his true self. To say it again, the Apostle Paul lived not for the temporary life in his earthly tent [his flesh], but he longed for the life that he would live in the eternal house. God would give him this everlasting home only after his spirit left its earthly tent.

The Apostle Paul wrote similarly in a letter to the saints in Philippi.

Phil. 1:21-24 『For to me, to live is Christ and to die is gain . . . . I am torn between the two: I desire to depart and be with Christ, which is better by far; but it is more necessary for you that I remain in the body.』

Paul’s words, “We . . . would prefer to be away from the body,” in the book of 2 Corinthians 5:6 and the words, “I desire to depart,” in the book of Philippians chapter one, have the same meanings. “To be away,” or “to depart,” means to leave the body. What is the entity that dwells in the body or leaves it? It is Paul’s spirit, the true essence of Paul.

Paul revealed that it was more necessary for the saints that he remained in his body. If Paul were to leave his body [if he were to die], he would go to Christ; thus it was good for him to leave the body. If he remained in the body, however, it was good for the saints because then he could teach them the truth of God and guide them down the right path.

Paul also uttered a revelation that God had shown him in another letter to the Church in Corinth.

When Paul saw this revelation, he said twice, “ . . . whether I [my spirit] was in the body or out of the body I do not know God knows.”

If the Apostle Paul believed that the spirit did not exist, could he have said, “Whether it was in the body or out of the body I do not know?God knows” . . . ? When Paul saw this revelation—describing himself as “a man” he knew (speaking in the third person)—he didn’t know whether his spirit had traveled out of the body, or if he had gone to such a paradise in his flesh.

The Apostle Peter’s Thoughts About the “Spirit”

The Apostle Peter always remembered what Jesus had told him before His ascension.

John 21:18-19 『“I tell you the truth, when you were younger you dressed yourself and went where you wanted; but when you are old you will stretch out your hands, and someone else will dress you and lead you where you do not want to go.”Jesus said this to indicate the kind of death by which Peter would glorify God.』

When Peter’s life of the gospel was about to come to an end, he worried about the saints, remembering what Jesus had told him.

2 Pet. 1:13-14 『I think it is right to refresh your memory as long as I live in the tent of this body, because I know that I will soon put it aside, as our Lord Jesus Christ has made clear to me. And I will make every effort to see that after my departure you will always be able to remember these things.』

Peter described his death as “putting aside” the tent of the body, and as his “departure.” It is clear that it is Peter’s spirit that would leave his body. While his spirit was in a fleshly body, the body itself became his spirit’s house; after his spirit’s departure, the body would return to the ground.

We study the apostles’ thoughts to know the teachings that they learned from Jesus. Through the apostles’ explanations of the spirit, we can clearly understand that Jesus Christ had taught and revealed that the spirit exists within men.

We often wonder, “Who am I?” Some say, “Man eats to live,” while others argue that, “Man lives to eat.” Neither of these opinions is correct.

Our main essence is not our physical body, but the spirit inside our body. Our spirit lives in the tent we call our “body.” When we go camping, we only stay in a tent for a few days, don’t we? The time we spend in the tent is temporary. Likewise, our life within the body—our tent—is only a temporary life.

If we live for our physical body, it means that we are living for our house. Life is to live for ourselves, not for the houses we dwell in.

In our life of faith, we sometimes focus on our physical life more than our spiritual life. Of course, as long as we are in the body, we can’t deny the physical life; however, if we live only for a temporary tent which will soon disappear, how pitiful will our life be?

We live in these tents because of our sin, but after we receive the forgiveness of our sins, redemption—under the grace of Christ, the Passover Lamb—our eternal houses wait for us. Let’s reconsider what we should focus on while we live on this earth.

« Baptism, The first step of salvation